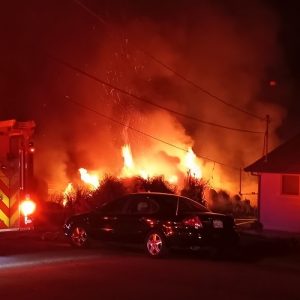 Explosions brought the attention of neighbors as a West Redding house went up in smoke Monday night. At around 9 O’clock multiple 9-1-1 calls reported the fire on Summit Drive. It started in the backyard of the large two story house. Flames spread into the attic and spread throughout the interior. As firefighters arrived, large fireworks were exploding along with propane tanks. All the residents were alerted by smoke alarms and made it out safely. Damage is estimated at $200,000 to the house and another $50,000 for contents.

A fire Monday afternoon was attacked by both Cal-Fire and Redding Fire because it was in the mutual threat zone. At around 2:15PM the fire was reported off Harley Leighton Road. It was contained to just over two acres. The cause is under investigation.